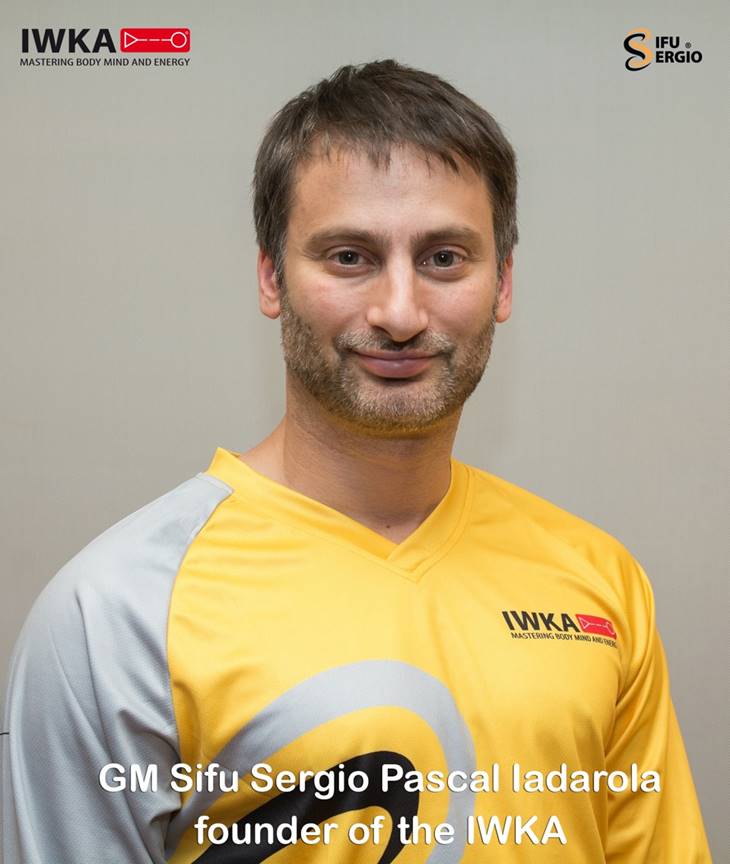 Sifu Sergio Pascal Iadarola started his Martial Arts career with judo a the age of six in the Dutch capital Amsterdam, winning several local tournaments, during his teens he also build up his with the practice of other Martial Arts like Pencak Silat and Wado Kai Karate.

Being a  big Bruce Lee fan, Sifu Sergio studied and read everything concerning him. As Bruce Lee started his martial arts journey with Wing Chun so for Sifu Sergio that would also be the path. To delve deeper he conversed with some of Bruce’s early students like James de Mile and Jesse Glover in order to find out more about the personal Martial Arts development of his idol. He also visited many more martial art schools as possible in Amsterdam together with friends to watch or take part in lessons.

Sifu Sergio from 1987 onwards trained in the Wing Chun system under Sifu R. Vogel and Grandmaster Wang Kiu, who was a direct student of the late Grandmaster Ip Man, and who immigrated to The Netherlands in the 70’s.

Around two months into Sifu Sergio’s training, he got a hold of a book “Wing Tsun Kuen” written by Grandmaster Leung Ting (the last closed door disciple of the late Grandmaster Ip Man). The book inspired Sifu Sergio so much that he made the decision to stop his training at Sifu Wang Kiu’s school after only four months into his training and to start looking for a Leung Ting affiliated school, that year Sifu Sergio started training the Leung Ting Wing Tsun System under Frank Schäfer, only for it to stop after an unfortunate car accident. Around nine months later he was able to resume his training and received his 1st Technician level from Sifu Keith Kernspecht who was the chief instructor of the EWTO in 1994 Germany.

Nine months after the accident he resumed his training eventually receiving his 1st Technician level from Sifu Keith Kernspecht the chief instructor of the EWTO in 1994 in Germany.

To reach his full potential in the art Sifu Sergio made great sacrifices and travelled all throughout Europe during the 1990’s attending many seminars in Germany and in Italy of Sifu Emin Botztepe and taking hundreds of private lessons from different Leung Ting Wing Tsun masters like Sifu H.P. Edel, Sifu S. Avci which resuted in him being appointed as the Israeli chief instructor for the EWTO during the period 1997-1998 for that he again had to make sacrifices moving to a foreign country and settling down in the Israeli capital of Tel Aviv was not easy but Sifu Sergio managed to set up a successful school for around a year before deciding to leave the country due to political stress.

Sifu Sergio kept thinking about one day becoming a personal student of Sifu Leung Ting and he eventually managed exactly that during a trip to Asia when he met Grandmaster Leung Ting in Hong Kong. Having seen and received instructions from him before only during Sifu Leung Ting’s European seminar tours, it was amazing that Sifu Sergio was fortunate enough to be accepted as a private student by Sifu Leung Ting and arrangements were made to start the daily private lessons with Sifu Leung Ting as soon as possible.
From returning to Europe to make arrangements for a long stay abroad Sifu Sergio decided that he would travel to Zagreb to finish and complete the unarmed Leung Ting Wing Tsun system under Sifu Slavko Truntic who was one of the master students of Sifu Leung Ting which was right step to take as it meant that Sifu Leung Ting only needed to correct him instead of teaching him certain parts of the system. Sifu Sergio took more than a hundred hours of private lessons from Grandmaster Leung Ting over the period of January three years in Hong Kong and in Shunde (Sun Tak) and also studied intensively under GM Cheng Chuen Fan at the Leung Ting HQ at the Nathan Road.

The relationship between Sifu Sergio and Grand Master Leung Ting became very close resulting socilising together a lot outside of the trainings hours and even going on vacation with Leung Ting to take more private lessons. During the periods in Hong Kong Sifu Sergio had the good fortune to be able to sleep across almost opposite of the school of Sifu Leung Ting receiving theoretical lessons, finishing and receiving the corrections of the whole unarmed system under Leung Ting himself in Hong Kong in the year 2000. This was an achievement which only one other Westerner had accomplished at that moment in time.

The next part of Sifu Sergio’s journey took him to New York where he spent two months in 2001 to complete the Leung Ting Wing Tsun weapon system: the Look Dim Poon Kwun (six and a half point pole) and the Bart Cham Dao (the eight way cutting broad swords) under his Si-Pak Fong Wai Hung (Alan Fong). Sifu Sergio became the first one ever to be taught the Bart Cham Dao from Sifu Alan Fong, during this trip he was promoted to the 7th level practician by his Si-Pak Alan Fong after he was impressed by the unarmed Wing Tsun skill of Sifu Sergio. Due to several circumstances Sifu Sergio had no choice but to set up his own Association in January ’02 the IWKA to promote and spread the authentic Leung Ting Wing Tsun system as taught by Grand Master Leung Ting, setting up dozens of IWKA schools all around Europe.

Being full of passion for Wing Chun, Chinese Kung Fu history and Philosophy it was not long after setting up all these branch schools that Sifu Sergio realised that the Ip Man Wing Chun lineage was not the only Wing Chun lineages around in China. It was shocking at first and he needed some time to accept that there were older, more complete lineages out there which was at that time all pretty much unknown in Europe. Sifu Sergio eventually decided over the next decade to pursuit the intense studying of other Wing Chun and Weng Chun lineages which meant that for the first time he came in contact with lineages that had an Internal side to their curriculum.
Sifu Sergio went to Study the Lo family Weng Chun lineage under Sifu Cheng Kwong the successor of the late Sifu Wai Check Yan who taught him the Saam Bai Fat and the art of Kam Na, as well as studying under the son of the late Grandmaster Pak Cheung a direct student of Tang Suen in China.

Sifu Sergio decided to leave his full time IWKA HQ in The Netherlands to some of his highest level students to immigrate to Hong Kong and became one of the first Westerners to open up successful Kung Fu School in Hong Kong and China.
Delving deeper into the Tang Weng Chun system (Eternal Spring Lineage) of the late Grandmaster Tang Yick that he studied With Pak Cheung Kao in China Sifu Sergio went on to study with Sifu Tang Chung Pak for a number of years who taught him the Luk Dim Poon Kwan, Weng Chun Kuen form and two men sets before finally becoming a close student and friend of Sifu Sunny So who taught him the rest of the system in intense private lessons over a period of several years.

When Sifu Sergio was diagnosed with asperges  as a child which is a condition that has been a great fortune for him enabling him to accumulate knowledge, forms and internalise skills at a quicker rate than the average person. He is in good company with people like Nikola Tesla, Albert Einstein, Thomas Jefferson, Amadeus Mozart and Michelangelo with the same condition.

Sifu Sergio believes that is is that condition that enabled him to finish the curriculum of several lineages and even receiving master status in some during a period of no more than 10 years. He studied linages include the Sum Nung (Yuen Kay San) Wing Chun system, the ancestor systems of all the modern Wing Chun lineages, including the Fujian Yong Chun Bai Hei (White Crane) system under several sifu’s in intense private lessons across South East Asia.

In Vietnam he studied Vietnamese Wing Chun which developed in Vietnam through Yuen Chai Wan the Brother of the Late Grandmaster Yuen kay San.

The last studies that Sifu Sergio completed was the research into the Beautiful Spring lineage of Wing Chun came by coming into contact with the sources that provided him with the original Kuen Kuit from the 1800’s before the 1700’s Siu lin Tau (little training set) got split up into three form format of Siu Nim Tau (little idea form) Chum Kiu and Biu Tze sets around the time of the 1854 uprising and the 1855 burning down of the Fine Jade Hall. These Kuen Kuit are testimony to the fact that the Fusion of Fujian Bai Hei ( White Crane ) and Emei Zhe Zhuang responsible for the creation of the 1700’s Siu Lin Tau resulted in a unique internal set on par with the northern internal arts which served as the base from which the later more external 3 set format versions of Wing Chun came about.